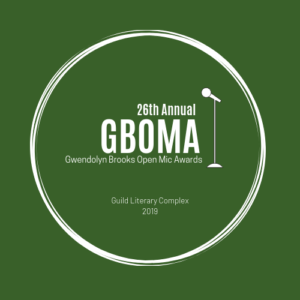 Kimberly Dixon-Mays is a poet, playwright and performer. A Cave Canem, Callaloo and Ragdale fellow with two collections, her journal publications include Consequence magazine (finalist, Prize in Poetry, ‘14) and Rhino magazine (finalist, Founder’s Prize, 2018). She is also a Chicago Dramatists Tutterow Fellow and has received various staged readings and productions including (Nine) – selected for Congo Square Theatre’s 2019 August Wilson New Play Initiative, and a semi-finalist for the 2019 Eugene O’Neill National Playwrights Conference. She loves words alive.

Henry Sampson is a writer and teacher (now retired) for more than 30 years and has been affiliated at various levels with the Poetry Center of Chicago for more than 10 years, integral to its success and mostly recently as President of the Board of Directors.

We thank them for taking on the challenge of reviewing of all the wonderful submissions this year.

With so much excellent work to choose from, the judges’ selections exceeded even the list of finalists to include a couple honorable mentions. These poets will not compete, but their poems were worthy enough to be mentioned along with this great group of finalists.

Arturo Alvarez is a Chicago truck driver who writes when not in traffic.

Alice Brown is a poet, playwright, and artist who has resided in the Chicagoland area for most of her life.  She is writing a book of poetry and is also an actress and storyteller. She performed with the Ringling Brothers and Barnum & Bailey Circus as a dancer, acrobat, and aerialist in her youth.

As member of FLOW (For Love of Writing), Chirskira Caillouet endeavors to strengthen her prose and build a solid network of phenomenal writers. Her writings mostly include poetry as published in various college literary magazines and Young Chicago Authors’ “Say What” magazine. More than a page poet, Chirskira takes the stage, displaying her spoken word skills to multiple audiences from elementary schools to college and universities. In 2009, Chirskira self-published Honey Licorice (available on lulu.com) and learned to create e-books. In 2014, Chirskira was one of a select group of spoken word artists to participate in the Gwendolyn Brooks Open Mic Awards for which she became a semi-finalist.  She hosts/ curates Wordfetti Open Mic and currently plays with Ladies Verse, a forthcoming art installation focused on women in hip hop. Then she explores multi-media collage. She’s the daughter of Thomas and Leonnie and loves peach pop.

Steven Hollander is currently pursuing an MFA in Creative Writing at the School of the Art Institute where they focus on playwriting and poetry. Before becoming a writer, they were an actor and an entertainment lawyer in New York City. They currently live in Chicago, IL.

Isaiah Mākar is the founder of Impact Mākars, which humanizes workplace communication by empowering employee voice through spoken word poetry. Isaiah found his voice in the Spoken Word Club at Oak Park and River Forest High School (OPRF) in Oak Park, Illinois, overcoming his fear of public speaking. Isaiah’s degree is in Organizational and Corporate Communication from the University of Illinois at Chicago (UIC). He has led trainings and presentations for organizations such as Grainger Inc, SHRM Chicago, DisrputHR Chicago & Cincinnati, CUPA-HR, Gensler, One Hope United, and many others. Isaiah is a mentor for OPRF’s Spoken Word Club and Louder Than a Bomb Slam team and has guest lectured at several universities such as UIC, Roosevelt University, and Loyola University Chicago. He competed twice in the Guild Literary Complex’s Gwendolyn Brooks Open Mic Awards and served as an Arts Education Panelist for the National Endowment for the Arts.

David Mathews earned his MA in Writing and Publishing at DePaul University. Recent work appears in Fox Cry Review, OMNI Reboot, After Hours, CHEAP POP, Eclectica Magazine, Midwestern Gothic, Word Riot, Silver Birch Press, Freeze Ray Poetry, and One Sentence Poems. His poetry has been nominated for The Best of The Net and a Pushcart. He has received awards from the Illinois Women’s Press and the National Federation of Press Women. He lives in his hometown of Chicago where works as a Creative Writing Instructor at the Chicago High School for the Arts (ChiArts).

Sharon Powell is a Chicago poet and performance artist working solo and with ensembles. Her work has been showcased and adapted for stage at numerous local venues including Guild Complex, the Green Mill Lounge, the Park West, the Metro, the Printers Row Book Fair, and DuSable Museum. Powell has also performed in Atlanta, Milwaukee, Amherst, Boston, and Miami as well as been published in Catalyst and Mosaic magazines.

Kelly Raymundo has been writing and performing poetry since her high school days, when she competed in Louder Than a Bomb poetry slam here in Chicago. She has a bachelor’s in English Literature from Benedictine University, and this year she plans to release a book of her poetry.

Erin Roux is almost done scraping her way to her BA in creative writing at DePaul University. In the meantime, she is collecting antiques and trying to resist the urge to do stand-up comedy.

Myron Stokes is a ten-year air force veteran and currently provides clinical counseling to veterans that suffer from Post-Traumatic Stress Disorder. He has been writing poetry for 15 years and has won national poetry contests and has work published in several poetry journals.

Erin Sweeney is a writer and editor living in Skokie, IL.  She got her MA from DePaul University in Writing and Publishing and attended Fordham University at Lincoln Center for her BA.  She enjoys cooking, craft projects, and is an avid reader and music enthusiast.  Check out her website www.esweeney.rocks.

Stasa Wade is a Michigan born artist who has spent the past 5 years based in Chicago. She works in textiles, ceramics, painting, writing, and digital art. Since finishing her degree in marketing and creative writing at DePaul University in 2018, her art practices have informed her work in youth organization, restorative justice, and design. She is currently a Tuley Park Cultural Center artist in residence.

Erin Watson is a Southern person living in Chicago. Her poems have appeared in the chapbooks Breathtaken and No Experiences. Her essays and criticism have appeared in the Volta Blog, Story Club Magazine, and We Can Turn the World to Gold: A Carly Rae Jepsen Fanzine. Erin cohosts Other People’s Poems at Uncharted Books and the Basement Life reading series in Avondale. She is a 2014 GBOMA finalist and 2018 semifinalist, and she’s happy to be here.

Arne Weingart lives in Chicago, where he is the principal of a graphic design firm specializing in identity and wayfinding. His poetry is broadly published in journals and reviews. Recent work has been nominated for a Pushcart Prize, and he is the recipient of the 2019 Frost Foundation Prize. His first book, “Levitation for Agnostics,” was the winner of the 2014 New American Press Poetry Prize and was released in 2016.

The finalists will perform their poem in one of four semifinal rounds at the Open Mic Awards on September 17, 2019. The winner of each round, as judged by the audience present in the room that night, will advance to the final round, based on which the audience will select the 2019 Gwendolyn Brooks Open Mic Award Winner.

RSVP
Buy your tickets HERE
Dinner reservations before or after can be made HERE.