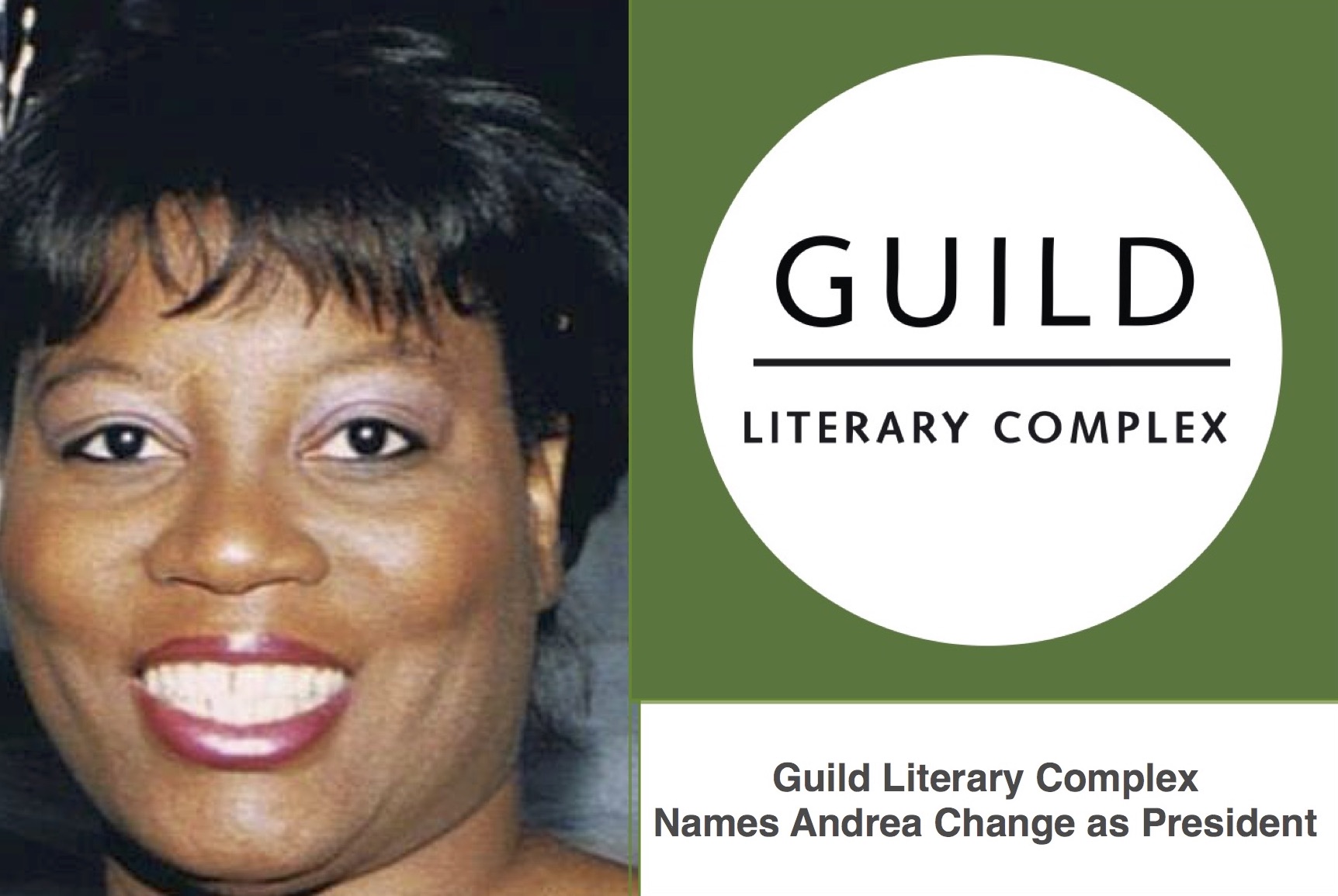 CHICAGO – The Guild Literary Complex, one of Chicago’s oldest literary organization, is pleased to announce that Andrea Change is the non-profit’s new president.

Change is poet, writer and a long-time friend of the Guild Literary Complex and until recently served on the executive board as secretary. She has been instrumental in many of the Guild’s key programs, like the Musicality of Poetry and more currently, BrooksDay, the celebration of the work of Illinois Poet Laureate and Poet Laureate Consultant to the Library of Congress, Gwendolyn Brooks.

Change’s work has been published in a number of poetry magazines, journals and included in such poetry anthologies from Tia Chucha Press as Powerlines and Stray Bullets. Her poetry was also included in the 2001 Steppenwolf Theatre production, Words on Fire. Change was born and raised in Chicago, and much of her poetry is inspired by her experiences growing up in the city.

She is also an eLearning Instructional Designer at CCIM, the global leader in commercial and investment real estate education and services.

“Since my days as a volunteer with the Guild, it has always been home. I have grown up literarily with the Guild. It is part of my life as an artist in Chicago. There are so many people, over the years, who have been part of the Guild family,” Change said. “Working with Lisa Wagner, our Executive Director, and going into our 30th year as an organization, I hope to remind people that the Guild is still home. So many literary communities and organizations exist because of the Guild’s work. It’s a touchstone and a refuge in the lives of many working artists in Chicago. Now is a time to bond with fresh voices and constant friends doing what the Guild does best, bringing the margins in to a literary collective that trumpets even the smallest voice. I would love for the Guild to be part of that journey for someone else.”

Change will become only the fourth president in the Guild’s 28-year history.

Stepping down from the presidency is Mike Puican, who has served at the Guild’s president since 2006 and has served on the board since 2005. Mike will remain active on the executive committee of the group as he moves into the secretary position vacated by Change.

During his tenure as president, Puican oversaw some of the Guild’s enduring programs, such as the bilingual poetry program Palabra Pura and Voices of Protest, and international writing series where the Guild sent four writers to Norway to read and brought exiled writers to the US to share their work.

Puican is a poet and has had his poetry published in journals such as: Poetry, Michigan Quarterly Review, New England Review, among many others. Mike was a member of the 1996 Chicago Slam Team. He regularly writes book reviews for Another Chicago Magazine and TriQuarterly and is the director of custom training at DePaul University.

About the Guild Literary Complex:

Since 1989, the Guild Literary Complex has served the Chicago community through innovative programming that highlights the intersections of marginality, the power of community, and the impact of arts and activism. We build on Chicago’s rich literary traditions through vibrant storytelling and radical inclusion, advancing access to and from the margins. The Guild Literary Complex supports and encourage voices of all backgrounds and experiences to tell their truths, whether they are literary powerhouses or talented newcomers. We view literature as a vehicle of connectivity, and aim to merge seemingly disparate groups across Chicago’s 50 wards. The Guild Literary Complex is a 501c3 nonprofit organization working in collaboration with the City of Chicago and organizations like the Poetry Foundation, The Museum of Contemporary Art, The Art Institute of Chicago, The Chicago Literary Hall of Fame, The Southeast Asian Center, Brooks Permissions, Third World Press, Sones de Mexico and many others, creating dynamic programming highlighting our varied and robust literary community of voices speaking from the margins.