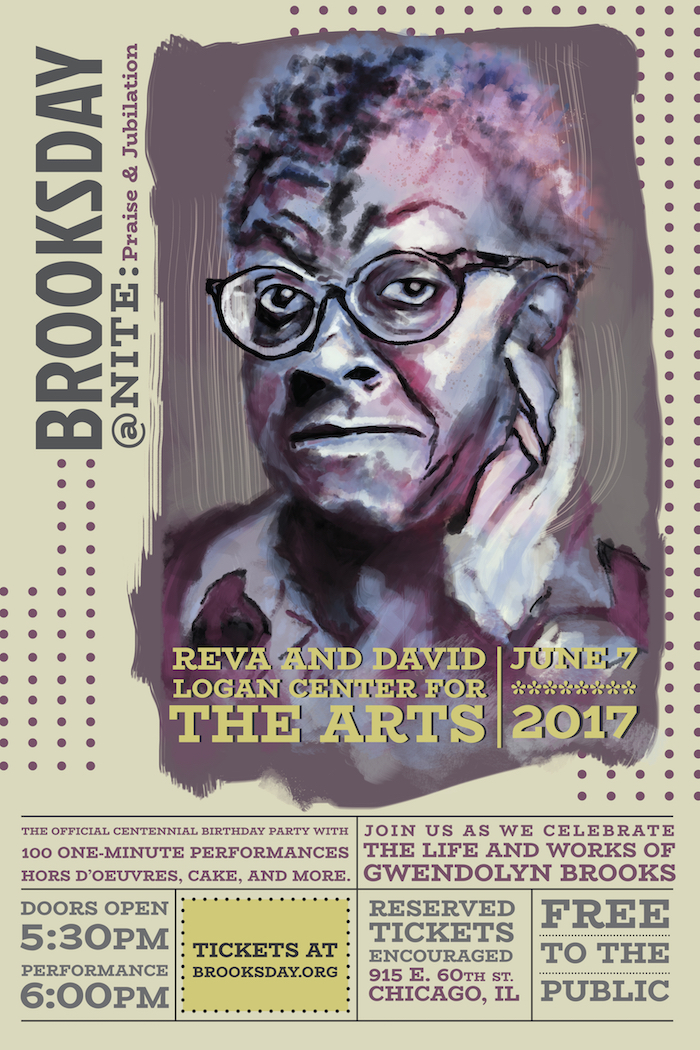 Along with youth, other poets, actors and teachers, many notable literary, cultural, civic, and political leaders from Chicago and beyond have taken the stage at the for BrookDay each uniquely celebrating and honoring  Gwendolyn Brooks, who was the first African American writer to win the Pulitzer Prize.  Since 2013 BrooksDay has been a marquee marathon event that has lead to a city-wide Brooks celebration in 2017.

Meet our Four Master of Ceremonies

Nora Brooks Blakely was the Producing Artistic Director and primary playwright for Chocolate Chips Theatre Company in Chicago for 29 years. Her readings and lectures have been conducted in several states. Ms. Blakely taught for eight years in the Chicago Public Schools and spent over twenty years teaching drama and writing workshops for students and teachers. Nora has also served on boards and committees for several youth and arts organizations. She is the daughter of two writers, Henry Blakely and Gwendolyn Brooks and founded Brooks Permissions, a company which manages her mother’s body of work and promotes its continued relevance in the 21st century. She looks forward to sharing SEASONS: A Gwendolyn Brooks Experience with the world when it comes out in January of 2017.

Kevin Coval  is a poet and community builder. As the artistic director of Young Chicago Authors, founder of Louder Than A Bomb: The Chicago Youth Poetry Festival, and professor at the University of Illinois-Chicago—where he teaches hip-hop aesthetics—he’s mentored thousands of young writers, artists, and musicians.
He is the author and editor of 10 books, including The BreakBeat Poets: New American Poetry in the Age of Hip-Hop and Schtick, and co-author of the play, This is Modern Art. His work has appeared in Poetry Magazine, The Drunken Boat, Chicago Tribune, CNN, Fake Shore Drive, Huffington Post, and four seasons of HBO’s Def Poetry Jam. Coval’s collection, A People’s History of Chicago dropped in April 2017 on Haymarket Books.

Sandra Jackson-Opoku is the author of two novels. The American Library Association Black Caucus award-winning The River Where Blood is Born was listed in Best Novels of the Nineties: A Readers Guide. Hot Johnny (and the Women Whom Loved Him) was an Essence Magazine Hardcover Fiction Bestseller in 2001. Her fiction, poetry, essays, reviews, and travel articles appear in the Los Angeles Times, Ms. Magazine, The Literary Traveller, Transitions Abroad, Rolling Out, Soul of America, and many other outlets. With poet Quraysh Ali Lansana she coedited the anthology, Revise the Psalm: Work Celebrating the Writing of Gwendolyn Brooks.Sandra Jackson-Opoku’s work has earned such awards as the National Endowment for the Arts Fiction Fellowship in 1983, a 1986 CCLM/General Electric Fiction Award for Younger Writers, a Ragdale Foundation US/Africa Fellowship in 1994, a William Randolph Hearst Research Visiting Fellowship at the American Antiquarian Society in 2008, and several awards from the Illinois Arts Council: Completion Grant in 1982, Finalist Awards in 1990 and 2000, and Special Assistance Grant in 2008. Her children’s writing has earned the Society of Children’s Book Writers and Illustrators Colen Award in New Children’s Writing and a Maeve Marie Fellowship for Children’s Writing at the Writer’s Colony at Dairy Hollow, both in 2008.Now retired from full time teaching, Ms. Jackson-Opoku has taught literature and writing courses at Columbia College Chicago, the University of Chicago, the University of Miami, and Chicago State University.

Actor, playwright, director, acting coach, poet, and graphic artist whose objective is to interpret the African American experience authentically, with all of its soulful complexities.

Actively involved in the theater from 1972 to date, beginning primarily as an actor, developed into a playwright, and later, an award-winning stage director. As a teaching artist, he has inspired and trained many performers and arts practitioners. He coached singer/actor, Jennifer Hudson, for her audition for the film, “Dreamgirls,” and has over thirty years experience developing youth and adult talent. Runako Jahi served as Artistic Director of eta Creative Arts Foundation from September 1990 to July 2014, developing the acting skills of novice actors as well as experienced ones.