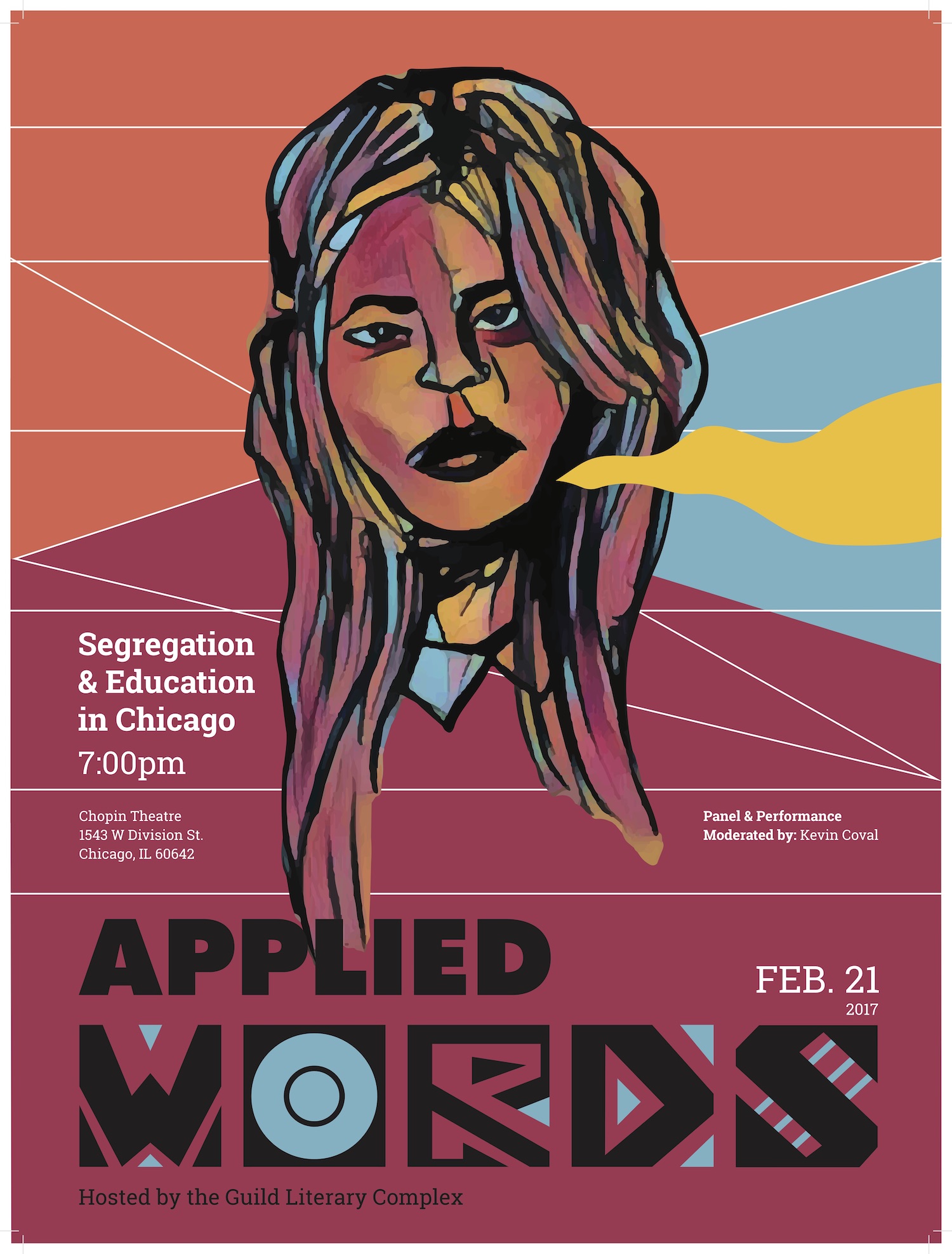 Applied Words is back!

Language is adhesive. By connecting artists and experts in various fields of study, Applied Words uses language as a platform for conversations about contemporary social issues at the local, national, and international level. Language takes on many forms such as words, dance, and visual art and in showcasing these languages alongside the conversation, we stick art and activism together.

This month’s Applied Words examines how Chicago’s racial divide affects its educational system. Kevin Coval, Founder of Louder Than A Bomb and Artistic Director at YCA, will be leading a panel of experts on education and artists alike in a discussion this subject.

The discussion will revolve around questions such as:
How does CPS’ funding crisis and subsequent teachers’ strike, affect students both in school and after school care programs?
At what point do we put teachers’ rights before students’ rights?
What are the positive and negative results of gentrification [in Chicago]?

How do these consequences influence different classes?

Kevin Coval is the poet/author/editor of seven books including The BreakBeat Poets: New American Poetry in the Age of Hip-Hop and the play, This is Modern Art, co-written with Idris Goodwin. Founder of Louder Than A Bomb: The Chicago Youth Poetry Festival and the Artistic Director of Young Chicago Authors, Coval teaches hip-hop aesthetics at The University of Illinois-Chicago, is a 4x HBO Def Poet and has written for a wide variety of publications including CNN & Fake Shore Drive. The Chicago Tribune has called him “the voice of the new Chicago” and the Boston Globe says he’s “the city’s unofficial poet laureate”. Coval’s forthcoming collection of poems, A People’s History of Chicago drops in the Spring of 2017 on Haymarket Books.

Dr. Dave Stovall is Professor of African American Studies and Educational Policy Studies at U.I.C and studies the influence of race in urban education, community development, and housing. His work investigates the significance of race in the quality of schools located in communities that are changing both racially and economically. From a practical and theoretical perspective, his research draws from Critical Race Theory, educational policy analysis, sociology, urban planning, political science, community organizing, and youth culture.

Matthew Shenoda – His debut collection of poems, Somewhere Else (Coffee House Press), was named one of 2005’s debut books of the year by Poets & Writers Magazine and was winner of a 2006 American Book Award. He is also the author of Seasons of Lotus, Seasons of Bone (BOA Editions Ltd.), editor of Duppy Conqueror: New & Selected Poems by Kwame Dawes, and most recently author of Tahrir Suite: Poems(TriQuarterly Books/Northwestern University Press), winner of the 2015 Arab American Book Award. Bearden’s Odyssey: Poets Respond to the Art ofRomare Bearden, edited by Shenoda and Kwame Dawes, will be released by TriQuarterly Books/Northwestern University Press in 2017.

Shenoda lectures widely and has taught extensively in the fields of ethnic studies and creative writing. He has held several faculty and administrative positions at various institutions and was recently appointed as the Dean of Academic Diversity, Equity, and Inclusion and Special Advisor to the President at Columbia College Chicago where he is currently Associate Professor in the Department of Creative Writing. Additionally, Shenoda has served on the Board of Directors of several arts and education organizations and is a founding editor of the African Poetry Book Fund. He lives with his family in Evanston, Illinois.

Lew Rosenbaum is a founder of the Guild Literary Complex and an anchor in Chicago’s literary and activist community. He edits and publishes the Chicago Labor & Arts Notes e-mail newsletter. He has been employed as a garment worker, printer, social worker, and history teacher, but for most of his life he has been a bookseller, first at the path-breaking Midnight Special Books in Santa Monica, CA, then at the legendary Guild Books in Chicago. As the proprietor, Rosenbaum helped to seed Chicago’s present-day literary community decades ago by hosting numerous readings and meetings that gave rise to the Guild Literary Complex in 1989. After Guild Books closed he worked for 10 years at Barnes & Noble, and he had the distinction of having been fired for not pushing the workers to work hard enough. He has a degree in Biology and three years in medical school, with postgraduate education with California farm workers, health care workers in Cuba, studying philosophy with radicals at the Institute for the Study of the Science of Society, and working alongside Occupy activists. He writes on education and independent politics for The People’s Tribune newspaper.

Ladan Osman is the author of The Kitchen-Dweller’s Testimony. Her writing and photographs have recently appeared or are forthcoming in Columbia Poetry Review, Prairie Schooner, Rumpus, Transition, and Washington Square Review. Osman is a contributing culture editor for The Blueshift Journal. She lives in Brooklyn.

Aricka Foreman whose work has appeared in The Drunken Boat, Minnesota Review, RHINO, Day One, Phantom, shuf Poetry, James Franco Review, thrush, Vinyl, PLUCK!, Please Excuse This Poem: 100 New Poems for the Next Generation by Viking Penguin, among others. She is the author of Dream With A Glass Chamber from YesYes Books and the Art co-editor at The Offing. Originally from Detroit, she currently lives in Chicago.

Christian JaLon (pronounced: Juh-Lon), is a 19 year old Chicago Native. She’s been singing since the age of 7, but has been active in her craft since she was 13 years old, starting out posting YouTube covers of other artist’s songs. When Christian was a junior in HS, she began attending open mic nights including Young Chicago Authors, Chance The Rapper’s Open Mike, & more. Christian released her first project, “SELF EP” in the Summer of 2016. You can find Christian on SoundCloud, Twitter & Instagram.